When I was seven years old, my grandfather decided I could make myself useful on a Sunday morning at the open-air service held at Kirk Braddan. This was held in a steep hummocky field behind the old and new churches. A small plain wooden hut with a hinged front served as a pulpit for the preacher of the day. Two giant bullhorn speakers adorned the front corners of the roof and a record player served as organ, choir and pied piper. The holidaymaker congregation streamed in by the thousands. They came on foot, they came by chara (coach), they came by bus, they came by taxi, and they came by bike. They came from south, east, west and even some govags from the north. Landaus graced the flood of humanity with smiling occupants and it was a great sense of occasion. It was happy and it was gay. It was hymn singing at its best.

Granda and I were there by 8.30am, along with many others to man the main entry at the bottom corner of Old Braddan churchyard, which is tucked away in the left hand corner as you come over the Braddan Bridge. We fronted the main ranks of foot traffic. Sheafs of hymn sheets in the left hand, collection box laying along the forearm and the other hand, fanning sheets right, left and centre racing around with the money bag and hotfooting it up to the church hall and tipping it out onto the counting table then back to the sheets.

There was a half an hour gradual build up of crowds, an hour with a crowd always in front of you and half an hour to taper off. Forty thousand was our largest estimated crowd but most fine mornings were around twenty thousand with collections up to £210 all in small change.

The counting amazed my youthful wondering eyes. The trestle table sagged with the weight of the money, hands and fingers flashed as neat stacks of coins became neat rolls and bags with the three leather ports filling and filling. I loved the excitement of the counting house and the soaring tones of the hymns in the background.

Fine mornings saw many there by 8:30am, to settle on the grass with the Sunday papers; “News of the World” was popular as large news sheets made shady hats as the day warmed and the crowd buzzed with gossip and good fellowship. Services were ecumenical with a short sermon, never longer than fifteen minutes, preached by a different church dignitary each week but the hymns, the hymns. The hymns were the thing.

On went the records of the Glasgow Orpheus or the Lonn Dhoo Male Voice with gigahertz of bullhorn to kick them on, and up rose thirty thousand happy holiday makers full of good cheer and the joy of living to do their best to drown them out.

It was there I learned that I can’t sing but I loved a good shout. Singers were aplenty and the great hymns rolled forth along the valleys to Crosby, Injebreck, Baldwin and down to quell the waves on Douglas Bay. I didn’t hear the music; I felt it and it carried me along.

Oh for the days of a walk in the sunshine, good company, a good shout and a stroll back to a beer before lunch. It’s a pity I never got back as an adult. 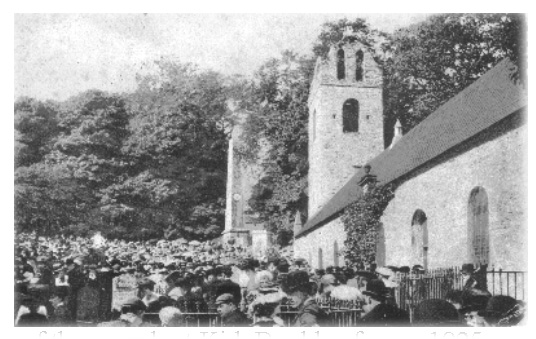 Image: Some of the crowds at Kirk Braddan from a 1925 postcard 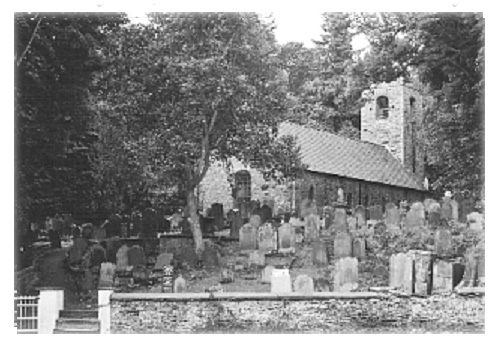