Tales From A Manxman

My name is David Kemp and I am proud to be Manx. My twin brother Edgar and I were born in Ramsey on the Isle of Man and we lived in Waterloo Road, Ramsey before moving to Andreas. My mum (nee Marion Ball) met my dad during the Second World War while he was serving at R.A.F. Jurby and R.A.F. Andreas. My great grandfather, William Ball, was the skipper of the Manx fishing boat ‘The Wanderer’ who along with his crew of six, rescued one hundred and sixty of the Lusitania’s survivors from the water when the liner was torpedoed by a German submarine off the old Head of Kinsale on 7th May 1915.

He and his crew were each presented with a Lusitania Medal by the Lieutenant Governor of the Island, Lord Raglan at Tynwald Hill, St. Johns on July 5th 1915. 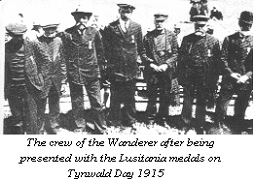 My mum, dad, brother and myself lived on the housing estate at Andreas which was part of the old R.A.F. Base and Edgar and I would go down to the old runway and watch the T.T. motorbikes and sidecars practice for the T.T. races. It was great fun. We both attended Andreas school and I remember that the Headmasters name was M.A. Faragher and our teacher was Freda Moore from Peel.

Edgar and I got up to a lot of mischief on the old R.A.F base, like the time we collected buckets of green frogs from the lorry inspection pit and tipped them out onto the floor of our dwelling. This did not make mum too happy because it took ages to retrieve them all. I also recall the day we set the blackberry bushes alight at the back of the R.A.F. huts. It took us ages, with the help of a not so happy mum, to put the fire out with buckets of water.

The Manx Main Roads Department kept a beautiful old steamroller in the village and the engine driver chewed and spat out plug tobacco. He also squirted oil over Edgar and myself from a large oilcan when we poked fun at him. Mum was not impressed with our oily clothes either. Some weekends, Edgar and I would walk the one and a half miles up the road to Blue Point and Rue Point beaches and sometimes go up near the Point of Ayre lighthouse and watch the Belfast boat sail by. They were great days, full of well-remembered childhood fun. We were also friends with the local policeman, Bob Corrin. In 1974, when he was the Island’s Chief Policeman, my then wife Jenny and I went out to dinner with him at a large fancy hotel in Douglas. It was a great night, great Manx food and great Castletown ale. There are many tales I can tell of our life in the Isle of Man before we moved to Australia, but unfortunately, space does not permit.

We had wonderful days on the Island, watching the T.T. races at Ramsey, coach tours and riding on the steam train from Ramsey to Sulby Glen. There was the Douglas to Peel steam train and the Snaefell electric car. Those were the days. I just loved the horse trams at Douglas.

My dad played in the Ramsey Town Band and in September 1954 he was a member of the band that played at the centenary of the opening of the Lady Isabella, “The Great Laxey Wheel” What a day that was. We all travelled up to Laxey from Ramsey on the red double-decker bus to be part of the celebrations. It was great fun climbing the staircase to the top of the wheel and looking out over the proceedings. My musician friend and I visited the Island in 1999 and had a great time on the Douglas to Laxey then Snaefell tram. (Snaefell foggy and Laxey harbour sunny. What a strange effect it was) We rode the horse trams and were invited to the horse tram stables and visited the home for old horses on the old Castletown road.

I miss my beautiful Celtic Viking Island Ellan Vannin and I even miss playing conkers at the Andreas Churchyard. There is so much more I can tell, so many memories and great times. So much nostalgia. Goodness! Is that a tear in my eye?